Who Is The Captain of My Soul?

Weekly Impact is written for leaders by our Executive Director, Garth Jestley, who has decades of experience in senior leadership roles in the financial services sector. Each week he will share insights on life, leadership and faith.

On September 25th, Mary and I were driving into downtown Toronto on the Gardiner Expressway. En route, we passed under an electronic sign displaying the words “I AM” flanked on either side by an ad for the Invictus Games, then underway in Toronto. Curious about the motto, I googled the Games later that day. 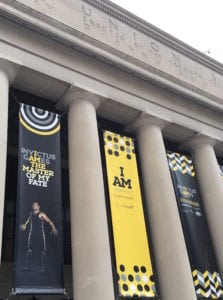 From the event website, “The Invictus Games are an international sporting event for wounded, ill and injured servicemen and women, both currently serving and veterans…‘I AM’ is the motto for the games, inspired by the final two lines of the poem Invictus, penned by English poet William Ernest Henley…The speaker in the poem proclaims his strength in the face of adversity…‘I AM’ reflects and defines the Games’ core purpose: to provide a platform for personal achievement, to compete, not just against each other, but against oneself and prove that ‘I AM the master of my fate, I AM the captain of my soul.’”

The purpose behind the Invictus Games is noble and it is easy to appreciate why this poem inspired the name. As it happens, one of the men in a LeaderImpact group I attend volunteered at the Games. Deeply inspired by the sight of the wounded warriors, he was amazed to see so many people with missing limbs in one place.

While all my limbs are intact, I have certainly experienced the wounds of major adversity over the years. As I considered how we as marketplace leaders deal with life’s tribulations, I was struck in two very different ways by the words “I AM.”

Our attitude is critical to overcoming adversity, but the power of the human spirit pales next to that of God’s Spirit.

First, “I AM” makes the important point that our attitude is critical to overcoming adversity. In effect, Henley suggests the path to victory lies within ourselves. ‘I AM the master of my fate, I AM the captain of my soul’ could actually be the motto of secular marketplace leadership. This “I AM” suggests that we, and we alone, possess the power to “bootstrap” our way out of the holes in which we find ourselves.

Second, “I AM” reminded me of a passage from the Bible. When he encountered God in the desert, Moses asked for the name by which God wanted to be known by the Israelites. The answer: “I AM.” Of course, unlike humans made in His image, God is perfect in all His ways. While the Invictus Games demonstrate the tremendous power of the human spirit, that power pales next to that of God’s Spirit.

According to the Bible, the same power that raised Jesus from the dead comes to reside in all who entrust their lives to Jesus. [Ephesians 1:15-23, Romans 8:11] The catch: we must resign as captain of our souls and invite Jesus to be in charge!

In which “I AM” are you trusting?

Garth Jestley is a husband, father, grandfather, leader and business executive. Most importantly, he is a follower of Jesus Christ.