Weekly Impact is written for leaders by our former Executive Director, Garth Jestley, who has decades of experience in senior leadership roles in the financial services sector. Each week he will share insights on life, leadership and faith.

In the National Post on January 22, 2018, there was an article by Francisco Toro, executive editor of the Caracas Chronicles, concerning the outbreak of hyperinflation in Venezuela. The following excerpts capture its essence.

“Prices are now rising more than 80 percent per month, according to the opposition led National Assembly’s Finance Committee…At that rate, prices double every 34 days or so. Salaries lag far behind, leaving more and more of the country to face outright hunger. Thus, the looting…Every last avenue for people to put a meal on the table has been exhausted. A video that went viral recently showed Venezuelans literally running into a cow pasture to stone a calf to death to try to get a meal. How can Venezuelans go on? One thing is clear: No one in power much cares.”

Sadly, there are quite a few precedents for Venezuela’s dire situation. A few years ago, I spoke on the topic “Taking Risk on Purpose” at a LeaderImpact Forum in Saskatoon. Afterward, Derek Shevkenek, a member of the Saskatoon City Team, presented me with my “honorarium,” a 10 billion Zimbabwe dollar banknote! As a result of hyperinflation early in the 21st century, it is essentially worthless except as wallpaper. (Hopefully it did not reflect the value of my presentation.) At my request, Derek sent me the following picture of a 10 trillion Zimbabwe dollar banknote! 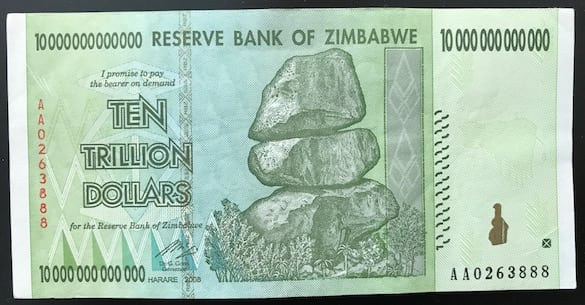 Many scholars have studied the hyperinflation phenomenon. While there are various views regarding root causes, common elements include misbehaviour by governments and central bankers as well as the moral failure and ineptitude of individuals in power.

In recognition of legitimate concerns surrounding the potential destruction of a currency’s value, there was a time when the value of paper money was backed by the promise it could be converted into gold at a fixed price. In 1929, Canada abandoned this so-called “gold standard” and today relies upon the Bank of Canada to safeguard the value of our banknotes.

Based upon God’s revelation in the Bible, there is a spiritual analogy to value and the ability to convert that value from one form into another.

Have you accepted THE gold standard?

Garth Jestley is a husband, father, grandfather, leader and business executive. Most importantly, he is a follower of Jesus Christ.